The TOC has been improved to incorporate our recent changes with tab leaders. Now you can apply and control the tab leaders in your TOC from the properties panel.. 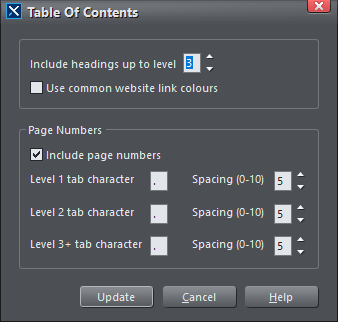 After adding page numbers, you can set the tab characters for up to 3 levels and their spacing between the characters. Any level after 3 will inherit the values of the 3rd level. You can also finely control the tab characters from the Tab Leaders dialog or Advanced Text toolbar.

Previously, after the 14 day trial, you were not able to open or use Designer Pro+. We've now added a demo mode for when trials have expired or for free users. In the demo mode you won't be able to export or save your documents, but you can still try out and use most of features of Designer Pro+

We've added a number of fixes and reliability improvements to our tables, and now included the ability to tab and shift + tab between cells. If you reach the end of the last row and press tab, a new row is inserted below also.