In addition to the Advanced Locking feature that have been released for Xara Cloud, we've added the new locking features for Designer Pro+, giving designers and admins more control over their templates. 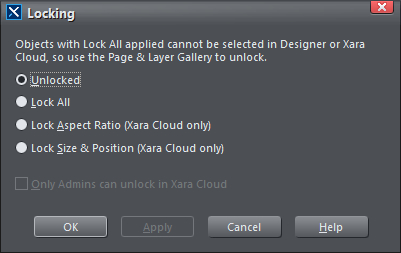 You can access these controls from Utilities > Locking. Locks that have been applied to your documents in Designer Pro+ will now be enforced in Xara Cloud. Click on 'Help' for more information on the lock options.

Other Improvements and Bug Fixes